The results are in and most clients find value in exploring their project in virtual reality (VR).

The application of VR in the AEC industry empowers clients to explore the areas in the project that are important to them – at their own speed and in a way more natural than looking at 2D prints and static renderings. This visualization tool can help to expedite client buy-in of a proposed design solution and instill confidence in the quality and progress of the design team.

Enscape can be your champion in the VR software category when it comes to a high-quality visual experience and ease of navigation.

This post will cover the “must-know” details when it comes to delivering a successful Enscape VR experience for your staff, clients, or key stakeholders and will also look at hardware options such as the Oculus Rift. Take a view on your own – download the free trial version now. 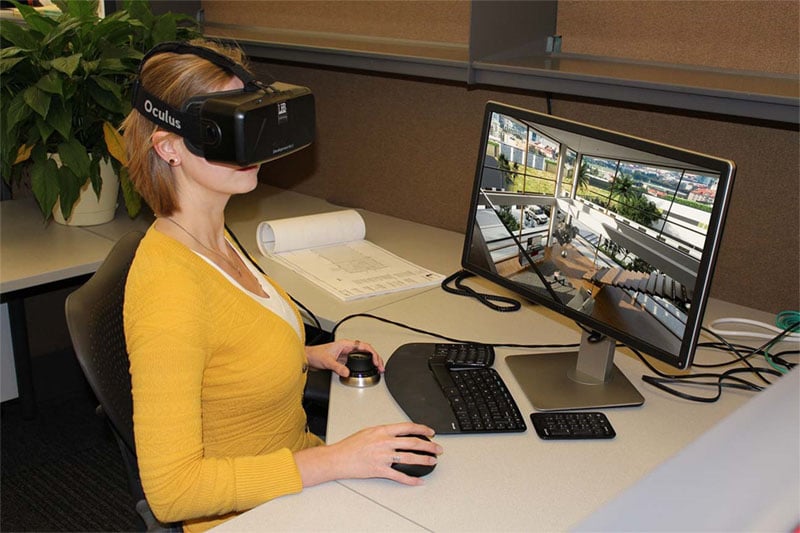 Once your model is open in Revit (same for SketchUp or Rhino) and Enscape has been started, simply click Enable [VR Headset] as shown in the image below. On a computer with a HTC Vive or Oculus Rift set up and connected, you can immediately start exploring your project in an immersive VR environment. 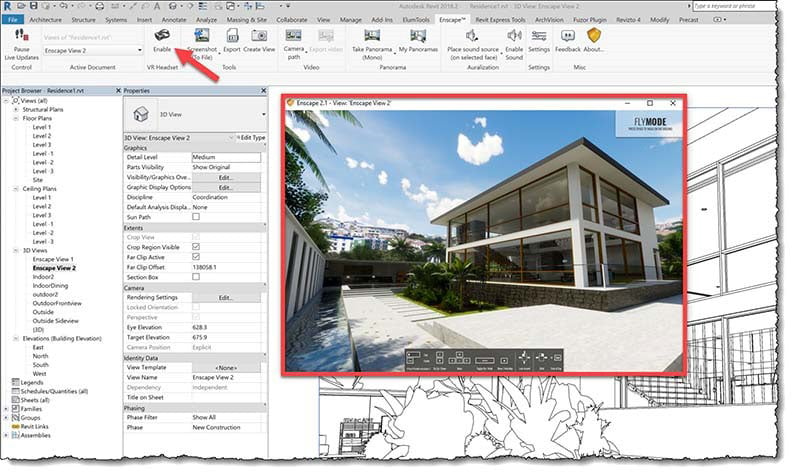 To restate how simple it is to get a Revit project into Virtual Reality, it only takes these three steps:

Once in VR, the wireless controllers in your hands appear virtually in front of you. Hold them up and look at them to see heads-up instructions as shown in the image below. In this first example, you see the Oculus Touch controllers and the button/control you are touching is highlighted with the orange line – Seated VR in this case.

This next image shows how the teleport feature works. While pressing the “teleport” trigger, you position the orange puck where you want to move to – let go of the trigger and you are immediately teleported to that location. You can use this technique to jump up to the floors above as well. 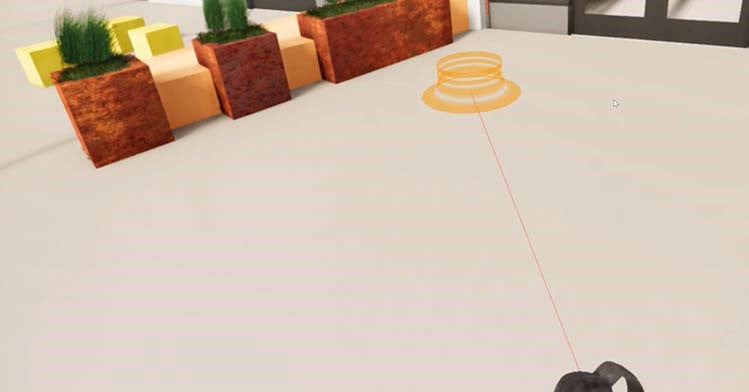 When inside a building, you can use the Elevation buttons to move vertically (up or down). This is a great way to peak in a plenum space and inspect the concealed HVAC and structural elements. Or, you could keep going up to the next level. The Move and Elevation features may not be for everyone. Continuous movement, while your physical body/feet are not moving, can cause nausea; consider setting some expectations in this regard.

Similarly, the HTC Vive physical controllers also appear virtually as shown in the next image.

Don’t have materials dialed in yet? No problem, just switch to White Mode and perhaps add a light Outline as shown in the image below. This setting works for normal Enscape usage and in VR.

When you are finished exploring your project in VR, click the Disable button as shown here.

As pointed out in the previous section, you need to open Revit and then start Enscape. Both programs must be installed and licensed to run on your VR computer. If Revit uses network licensing, you would need to have access to your server or have previously checked out a license for a specified amount of time. It turns out, Enscape can generate a VR-Ready standalone executable (i.e. EXE) file. With this single EXE file, you can open an Enscape rendered scene and immediately explore it in VR.

This standalone EXE file does not require Revit or Enscape even to be installed on the VR computer! Simply double-click the EXE file to open Enscape and activate VR. For a standalone EXE file to work for VR there is one step that I did not even know about until recently… In Revit, once Enscape has been started, you must Enable VR before using Export to create the EXE file as shown in the next image. When this is done, the file will automatically start looking for a connected HMD (i.e. Head Mounted Display, or, VR Headset) when opened.

The Enscape EXE file is a static version of the model that cannot be changed or updated—all the current settings in the Enscape Settings dialog are fixed. However, you can still change the time of day.

Consider saving a VR version and a non-VR version. When you save an Enscape VR-enabled EXE, it only works with VR. You cannot use this model to present on a computer screen or digital projector as it will only be searching for a VR system. However, when someone is using VR, others can see what they are seeing in VR on a screen.

TIP: Before exporting your Enscape model to an EXE file, be sure that your Detail Level is set to Fine in Revit.

Virtual Reality requires a lot of horse power! Revit, SketchUp and Rhino files can be massive. Unlike games, which are optimized for what you see on the surface, Revit projects are much more detailed and therefore require a lot more processing. While Enscape can get by with middle-of-the-road computer specs for non-VR visualization, you must have above average specs to deliver a reasonable VR experience to your clients and design team.

Graphics cards are one of the most important hardware components. At a minimum, Enscape recommends NVIDIA GeForce GTX980 or Quadro M6000 for VR. A better option would be NVIDIA GeForce 1080/Titan, or Quadro P5000/P6000. For large and complex projects, I recommend the VR-Ready Quadro cards as they are professional grade, made with premium materials, with better thermal properties and are designed to run 24/7.

The rest of the computer components should be carefully selected as well. One VR-Ready computer option by HP is their HP Z VR Backpack, which provides an untethered virtual reality experience as shown in the image below. Note that, in line with my recommendation above, this computer comes with an NVIDIA Quadro P5200; this is a special version of the P5000 made specifically for this HP computer. Consider comparing the specs for this dedicated VR computer when specifying your own new VR system. Dell also offers quality VR-ready computers in their Alienware and Precision lines. BIMBOX offers desktops ready to take on complicated VR tasks as well. There are certainly other capable systems, but these are the ones that I have had the opportunity to test and can vouch for. 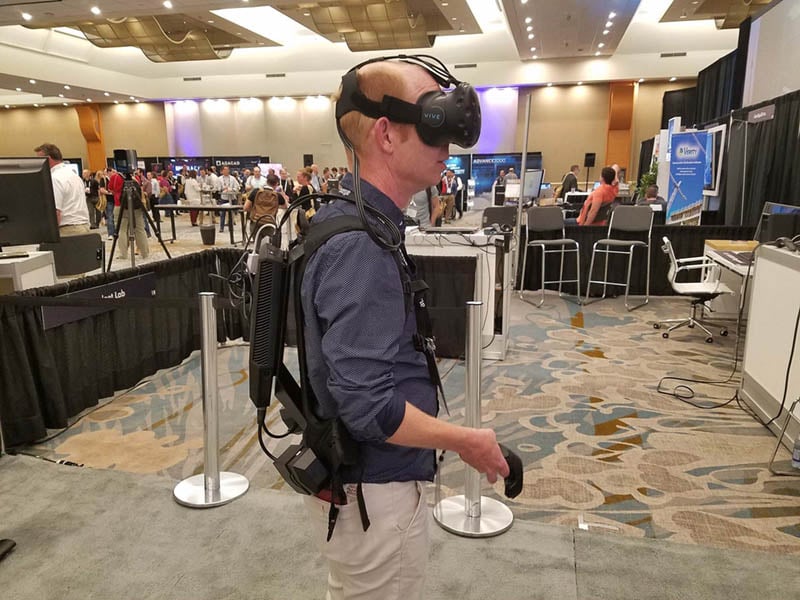 For most real-world AEC projects, I have not had good luck with laptops running VR. The quality is clearly not the same as a desktop system. There are some mobile configurations that are likely to perform well, but I have not had the opportunity to try them.

As alluded to already, Enscape works great with both Oculus Rift and HTC Vive. I have a lot of experience using both the systems with Enscape.

Enscape supports the Oculus Rift “VR system” and the newer Oculus Touch wireless controllers. The Oculus offers both “seated” and “room scale” VR experiences—“room scale” means you can physically walk around in a pre-defined area. For the “room scale” option you need two sensors (originally, the Rift only came with one sensor). The Rift requires the Oculus software to be installed and running for it to function. If Enscape is looking for a VR HMD, the Oculus software will start automatically.

FYI: The “room scale” experience can be problematic as both the sensors are on one side of the play area and when the controllers are blocked by your body (i.e. you are turned around), they get glitchy. 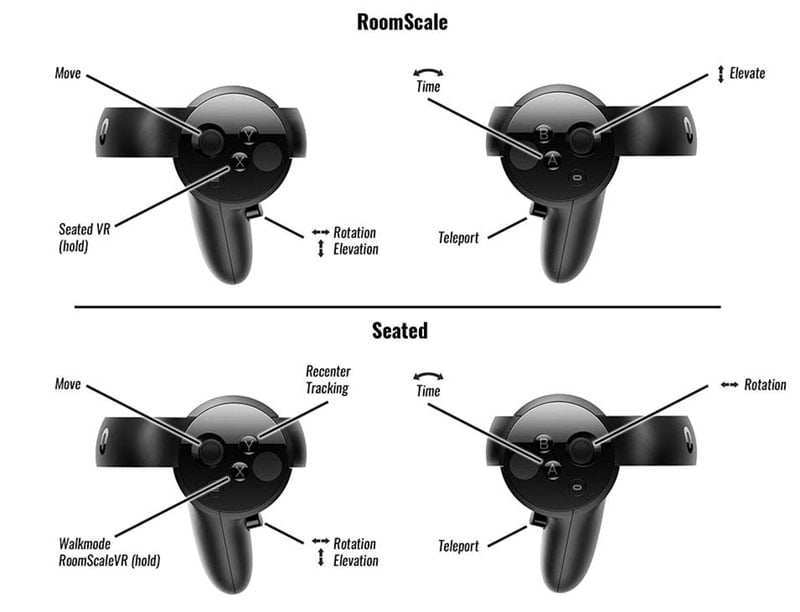 Enscape supports the HTC Vive and the wireless controls that come with it. The Vive supports “stationary” and “room scale” VR, with the latter being its best use case. The Vives “room scale” VR is nice because the sensors are positioned at two opposite corners of the play area, which makes it less likely to lose contact with controllers while moving around. 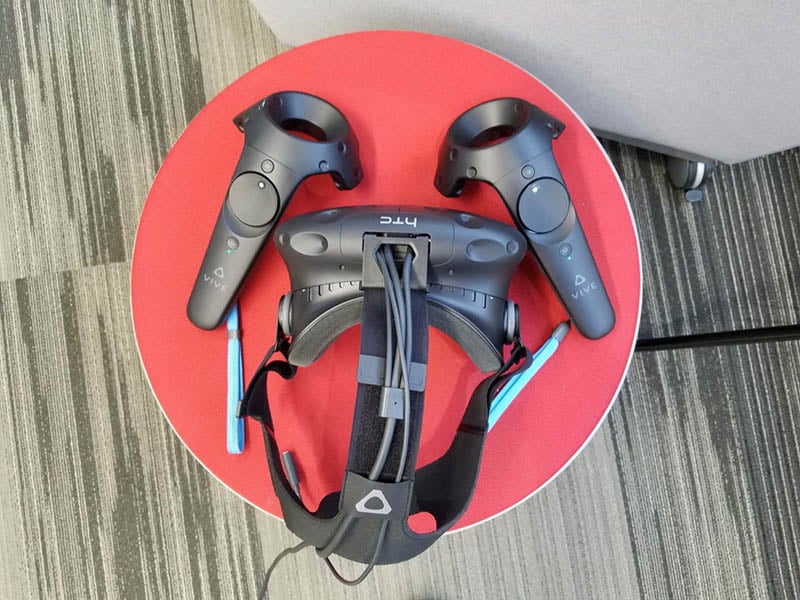 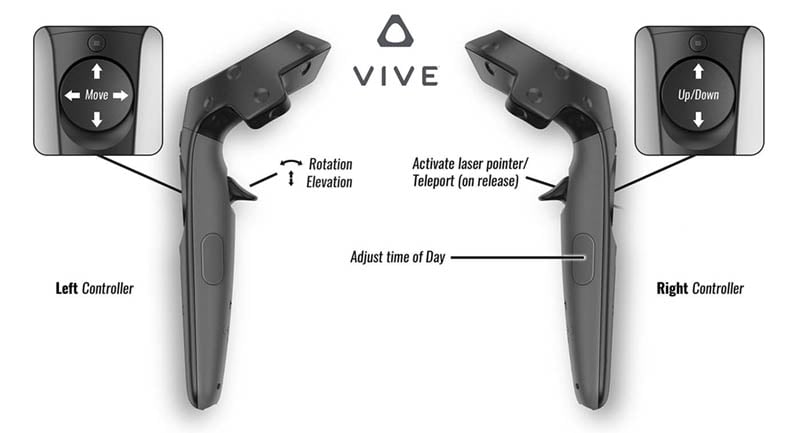 A recent development in the world of untethered VR is the commercial release of the TPCAST Wireless VR Adaptor for the HTC Vive. This is a great way to deliver an unencumbered VR experience to your clients. The image below shows all the parts which come in the box… clearly, there is extra setup time involved. 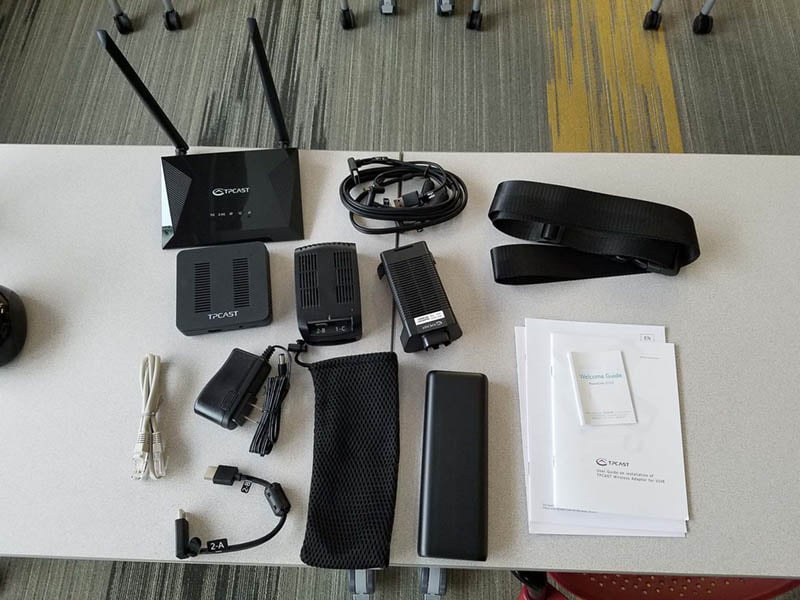 Enscape offers best-in-class real-time rendering quality and ease of navigation in the AEC marketspace. With literally two clicks within Revit, you can be in VR and exploring your model. This technology offers a new opportunity for the design team to verify and review the design internally as well as a more natural way for a client or stakeholder to explore and experience the proposed design. Enscape’s impact can be drawn from the response of clients who, tech and non-tech savvy alike, have already given their high praise.

Productivity Tips for Architects in 2021 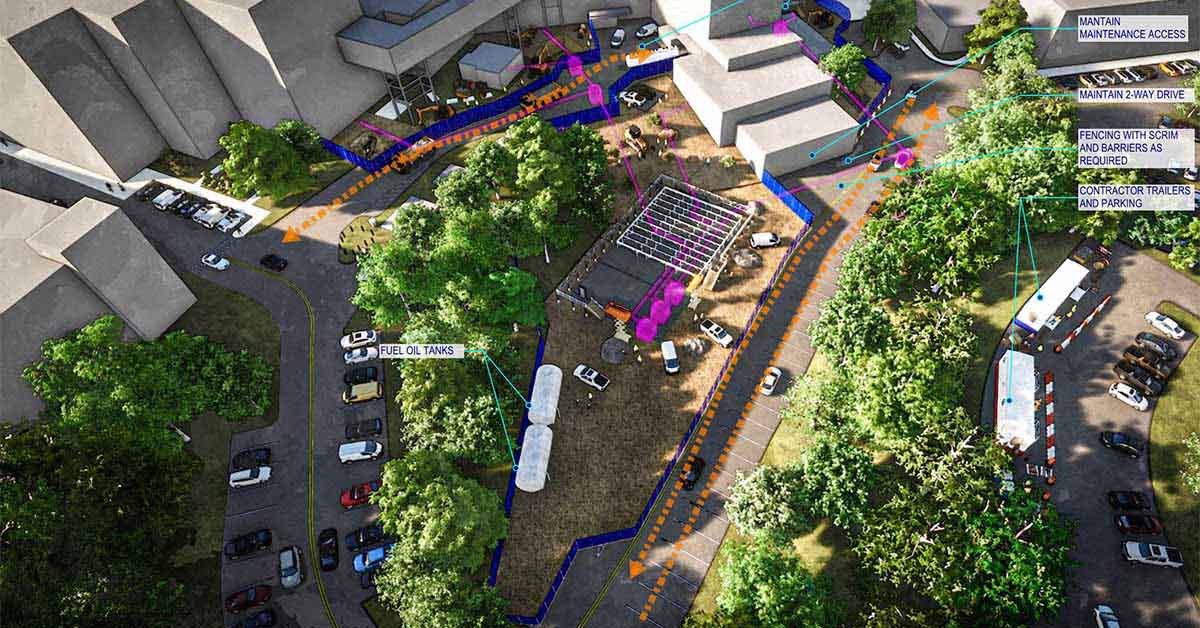 Webinar: How We Visualize, Plan, and Execute Projects With Enscape 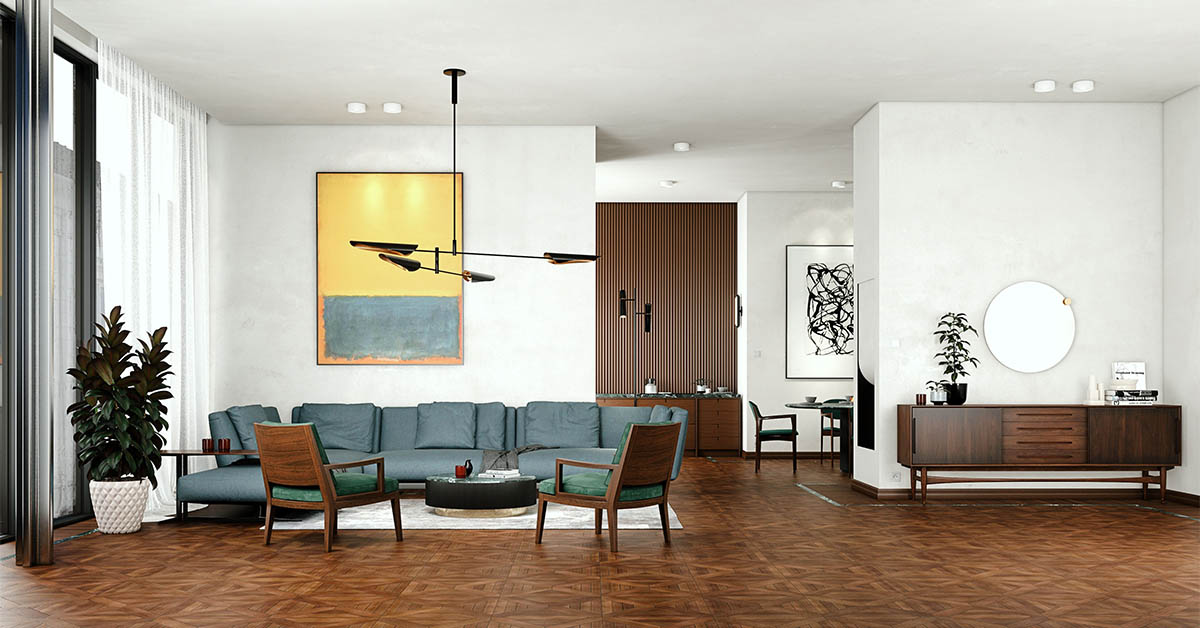 Video Tutorial: How to Create Realistic Lighting in SketchUp and Enscape

Please check your email to confirm your subscription.