Overland Partners was founded in 1987 in San Antonio, Texas. Known for their innovative and sustainable design, they are regarded as one of the top architecture firms in the United States.

With an impressive portfolio of diverse projects across the US and around the world, Overland's work includes places of civic and cultural significance; universities; non-profits; corporate headquarters, and hospitality.

With every project, Overland strives to unlock the embedded potential of every project and articulate each client's unique story, bringing people back into relationships with the land, their history, and each other. This was no exception for their project with ChildSafe, which they did using Enscape.

A desire to help the community’s most vulnerable

ChildSafe is a children’s advocacy center located in Bexar County, Texas. They provide evidence-based, trauma-focused services, therapy, extended care, and case management to child victims of physical and sexual abuse, neglect, or who have witnessed a violent crime.

In 2016, Overland Partners teamed up with the organization to design a new space for what was to become the Harvey E. Najim Children and Family Center—named after local philanthropist Harvey Najim who donated $5 million to the project.

The Overland team was tasked with designing a new facility that centered around the child's experience and brought multidisciplinary partners from different locations in Bexar County together under one roof to collaborate and care for the community’s most vulnerable citizens. The decision to do the project was an easy one, according to Overland Partners’ project manager, James Lancaster.

“Overland has always been a strong advocate for organizations that work so hard for the most vulnerable in our community. We quickly fell in love with ChildSafe, the mission, and the project. It was a very easy decision.”

One of the design challenges faced by the Overland team was the competing requirements from the various groups that would use the building.

Along with ChildSafe’s 100+ staff members and growing clientele, the building had to also accommodate the organization’s partners which included Child Protection Services, Bexar County Sheriff’s department, and the District Attorney’s office.

Certain groups, such as Child Protection Services and the San Antonio Police Department, had to follow strict guidelines to ensure the safety of the children and that their cases were not at risk of being mishandled or technically compromised. 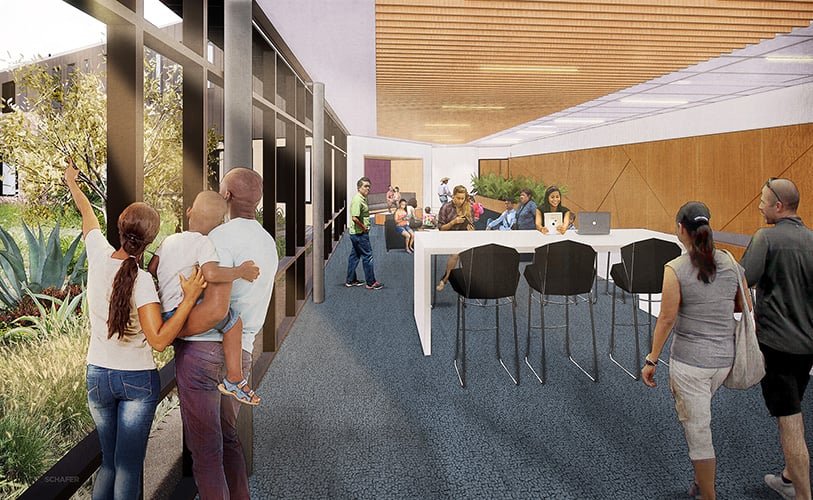 Enscape was used to help communicate the design and resolve competing requirements. The Overland team was able to illustrate the impact of opposing ideas and give the groups the confidence to make well-informed decisions.

The result was the faceted roof form which represented the collaboration and working as a single unit. Lancaster explains, “The design reminds me of a mother bird (the roof) resting upon its eggs (the stone blocks) in its nest (the site), providing the protective covering for those most vulnerable in Bexar County (our children) and those who work to protect them (ChildSafe and their partners). The roof provides a beacon of hope for the community.”

Conveying the connection to nature with virtual reality

As abuse often occurs within the home, the Overland team was mindful not to design anything residential or clinical. Instead, they aimed for a biophilic design due to the calming and healing influence of nature.

The Salado Creek Campus was chosen specifically for its park-like setting, which provided a great opportunity for nature to play an important role in the healing process. Surrounded by trees, the design included healing gardens, green roofs, and natural bioswales filled with native plantings.

Using Enscape with VR provided a subversive experience that served to better communicate the connection to nature. It also helped to express the functionality of the space and enabled partners and stakeholders to fully grasp the space before any construction began.

“Modeling the site, including the proposed landscape design, allowed us to visually understand the interaction between interior and exterior spaces. It also helped to guide design decisions that leverage nature in the health and healing process for children and their families as well as the ChildSafe staff.”

Enscape played a critical role in raising capital for the ChildSafe project. As with many projects for non-profit organizations, an extensive fundraising effort was needed to raise the capital required.

Using Enscape and VR meant potential donors were able to visualize what their donations would deliver. It helped them understand the connection between their donations and the finished project. Donors could experience the design and see how they were making a difference, which helped the team secure the initial commitment of $5 million to the project.

“We created renderings and video fly-throughs for use during meetings and presentations with potential donors. The ease and efficiency of Enscape allowed us to quickly provide updated collateral with little to no disruption in the development of the project’s design and communication. Rendering that would normally take days to generate only took a few hours to accomplish.” 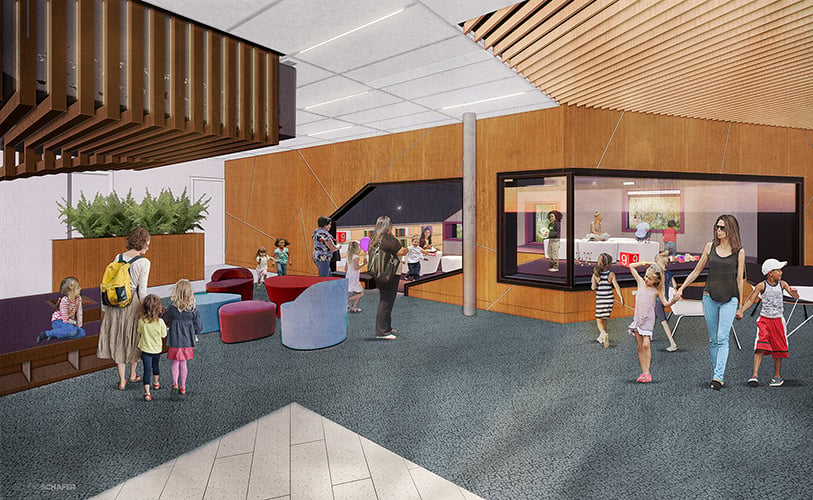 Designing a Beacon of Hope

The ChildSafe project was more than just a building design. The Overland team wanted to deliver a space where children felt welcomed and safe, and using Enscape helped to do exactly that.

“Implementing Enscape into our workflow was simple and seamless. The use of VR, still renderings, and video walk-throughs enabled us to effectively illustrate our design ideas as early as the concept phase.

The building design provides a beacon of hope for the community. ChildSafe has not only become a local model for any non-profit but a national model for how a child advocacy center should operate and deliver its services."